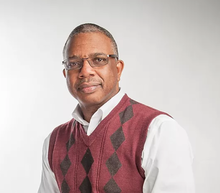 Milton Davis is an award winning Black Speculative fiction writer and owner of MVmedia, LLC, a small publishing company specializing in Science Fiction, Fantasy and Sword and Soul. Milton is the author of nineteen novels. He is the editor and co-editor of seven anthologies; The City, Dark Universe with Gene Peterson; Griots: A Sword and Soul Anthology and Griot: Sisters of the Spear, with Charles R. Saunders; The Ki Khanga Anthology, the Steamfunk! Anthology, and the Dieselfunk anthology with Balogun Ojetade. Milton’s work has also been featured in six anthologies including Black Power: The Superhero Anthology, Heroika: Dragoneaters published by First Perseid Press, and Bass Reeves Frontier Marshal Volume Two. Milton Davis and Balogun Ojetade won the 2014 Urban Action Showcase Award for Best Script and Milton’s story ‘The Swarm’ was nominated for the 2018 British Science Fiction Association Award for Short Fiction. To see/read more of Milton's work visit MVMedia. 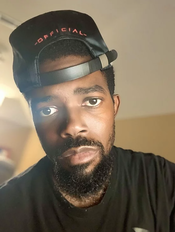 Mark Barnes, 3D animator and visualist, was born in New York in 1986 and lived in the Bronx until 2000. His grandmother bought him is first computer when he nine years old and he’s been hooked ever since.

Mark moved to Atlanta in 2002 and began creating visuals using credit scenes in PowerPoint. He also drafted houses in CAD programs for fun. In 2005, he graduated to Photoshop, editing pictures and creating custom Myspace pages. Mark began shooting videos in 2007 for local Atlanta artists and created his first YouTube series, PropzTV, in 2009.

2010 found Mark working with the music company, 20Twenty Entertainment, creating beats and graphics. He eventually transitioned into making music visuals in 2012. Mark also began working with Cinema 4D during this time, which was his introduction to 3D design and animation. While Jurassic got Mark interested in pursuing 3D visuals, it is Industrial Light and Magic that is his main inspiration. Mark’s primary goal is to find new and innovative ways to produce high quality visuals for effective storytelling without breaking the bank. 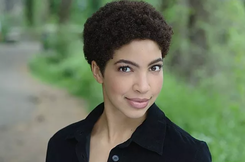 ​Paula Gammon Wilson is the Owner/Director of Pepsqually VO and Sound Design, Inc. in New York City. She is known for her excellence with managing multinational production teams due to her nearly 20 years experience as a director, production manager, dancer, writer, and voice over artist in North America, Asia, Europe, and South America. With Pepsqually VO, she has provided flap-adaptation, casting, performance direction, project/production management, and recording/engineering for a wide range of animated series, ad campaigns, pilots, and educational series. Her clients are based in both the US and abroad. Some of her casting and voice over performance direction credits include "BEAT" (Amazon Prime-Germany); "Strawberry Shortcake" (Wildbrain Spark-UK); "Grimm, Grimmer, Grimmest" (Pinna-US); "Pumpkin Reports" (Movimenti Productions-Spain/Primo-US); "The Peanuts" webseries (Wildbrain Spark-UK/Wildbrain-Canada); "Polly Pocket" (Wildbrain Spark-UK/Mattel-US); "Opal Watson: Private Eye" (Pinna-US); Armani's "Acqua di Gio" and "Profondo" Campaigns 2018, 2019, and 2020; and Lavazza's "Passion in Every Cup" Campaign 2019. To see/hear Paula's work, visit Pepsqually VO. 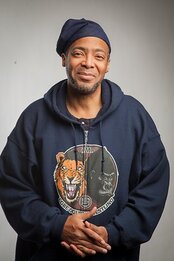 ​As a former combat veteran (MOS: 18F), Master and Technical Director of the Afrikan Martial Arts Institute and Co-Chair of the Urban Survival and Preparedness Institute, ​Balogun Ojetade is the author of the bestselling non-fiction books Afrikan Martial Arts. He is one of the leading authorities on Afrofuturism and Afroretroism. He writes about Afrofuturism/Afroretroism—Sword & Soul, Rococoa, Steamfunk and Dieselfunk at http://chroniclesofharriet.com/. Balogun is the author of twenty-five novels and gamebooks, most notably MOSES: The Chronicles of Harriet Tubman (Books 1 & 2); The Chronicles of Harriet Tubman: Freedonia; Redeemer; Once Upon A Time In Afrika; The Scythe; Redeemer: The Cross Chronicles; Beneath the Shining Jewel; Q-T-Pies: The Savannah Swan Files (Book 0) and A Haunting in the SWATS: The Savannah Swan Files (Book 1); and Steamfunkateers: The Steamfunk Role Playing Game and the Steamfunkateers adventure, The Haunting of the House of Crum. He is the contributing co-editor of three anthologies: Ki: Khanga: The Anthology, Steamfunk and Dieselfunk and contributing editor of the Rococoa anthology and Black Power: The Superhero Anthology.

He is also the creator and author of the Afrofuturistic manga series, Jagunjagun Lewa (Pretty Warrior), author/co-creator of the Ice Cold Carter photo-graphic novel series and co-author of the Ngolo comic book series.
​
Finally, he is co-author of the award winning screenplay, Ngolo and co-creator of Ki Khanga: The Sword and Soul Role-Playing Game, both with author Milton Davis. 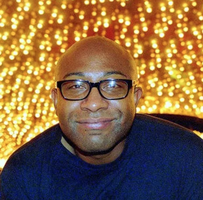 ​Otis Galloway is a musician, composer, and producer. In that order.

His creative philosophy is ‘Learn all the rules, then throw out the rulebook and write your own.’ Influenced and inspired by his late father’s career as a DJ and entertainer, Otis sought a subtler, more behind the scenes path that took him through the musical underground, where he drew on everything around him for inspiration. His work draws from his early foundation exposure to funk, reggae, soul, R&B, dub and ska, to his days as a college radio alternative rock DJ, the sounds of hip hop, the warehouses of New York and Chicago with the rise of house music, and time in Northern California, with a deeper grounding in West Coast ‘yacht rock,’ Oakland hyphy, and the electroclash movement of the early 21st century.

He is a proud and confident Black nerd, a music geek, an avid cheese enthusiast, a part-time supervillain, a full-time beer guzzler and eternal multiverse traveler with several hundred billion frequent light years…
If you asked him what genre his music fits in, he would be hard-pressed to tell you. To hear more from Otis, visit him on Spotify.
​
Otis resides and works in the soon to be independent country of Scotland. 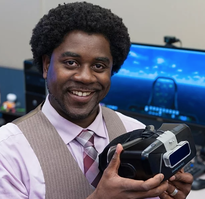 Mr. Deigratia A. Daniels is an accomplished Systems Engineer, Software Architect, and Project Manager. He received his Bachelor of Science in Industrial Engineering from the illustrious Florida A&M University (FAMU) and he is a Marching 100 alumni. Deigratia continued his education at the University of Central Florida (UCF) where he received his Master of Science in Interactive Simulation & Training Systems Design (Virtual/Augmented Reality Engineering). He has spent the last 20 years designing, building, and delivering Virtual and Augmented reality products, training systems and center to clients and customers all over the world.

Deigratia is an accomplished dancer, musician and artist. Deigratia has performed with legends such as Wynton Marsalis and Nat Adderly. His works of art have been featured at art institutions like Atlanta’s High Museum of Art and The Goat Farm Arts Center. Currently, Deigratia is the Director of Operations at Futurus and he uses his expertise to establish business processes, grow the business, train staff, and design and develop unique interactive experiences using the latest Virtual Reality and Augmented Reality tools and techniques. Deigratia’s mottos are “Imagination is the ability to navigate the unknown,” “Inception is a leadership skill,” and “We gotta blaze our own trails”. 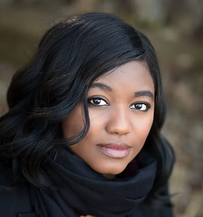 Ky Stovall is a professional multi-media and marketing specialist living and working in the city of Atlanta.  As a photographer, she began her career in the wedding industry, eventually garnering the coveted Best of The Knot Award, not once, but three times. Her award-winning photography found its way between the covers of such specialty publications as Bride and Bloom, and Atlanta Weddings magazines. Her corporate imagery has landed her contracts with Delta Airlines, Goodwill and Outfront Media.  And her most recent editorial work is slated for release inside the coveted pages of Vogue.

In TV and Film, she has had the opportunity to share the stage with Tyler Perry under her first Hollywood mentor, Robert Townsend (Playhouse 21).  Recently, she’s lent her multi-media and marketing talents to Bob Johnson’s new streaming platform UMC TV under show runner Shante Paige and its number one show, Beyond the Pole. She currently continues her training in the film industry with Willie E Simmons Jr., Second Assistant Director of (Lethal Weapon) and (Fallen) who is most famous for bringing mixed martial arts to big Hollywood productions.
​
In conjunction with “28 Days of Black Cosplay”, KY is finishing up her multi-media project, The Space Between, a documentary and companion coffee table book centered around women of color in cosplay. To see some of Kecia's photography work, visit her here. 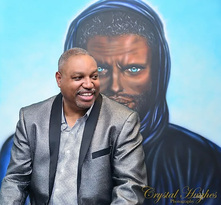 Scott Washington, is a New Jersey native born in 1964. Started his life as an artist at 4 years old and excelled throughout his school years. Graduating from high school with Honors in Art, he then attended the Art Institute of Philadelphia where he sharpened his skills and learned airbrushing techniques. Scott became the premiere airbrush artist for a company introducing air brushed nail art to the East Coast. Yet he never forgot his passion for illustration and model making. In recent years he has been recognized as a profound airbrush artist and model maker capturing the very essence of his subjects.
​
After serving a 4-year tour in the U.S. Army, Scott began a career as a professional model maker. He has won numerous awards in the US and Canada, at various shows like Wonderfest, Monsterama, IPMS Nationals, just to name a few. Scott previously worked for an architectural firm as a Senior Model Maker where he built architectural and concept models. Model making and sculpting is a passion of Scott’s. In his spare time he’s fabricating models of his own design. In 2016, his hard work and dedication paid off when he was featured as one of the Gold Medal Winners at Wonderfest in the Holiday Edition of the Fine Scale Modeler Special Edition magazine. To see more of Scott's work, visit him at EP1 Creations.
Click Here to Join the Fight